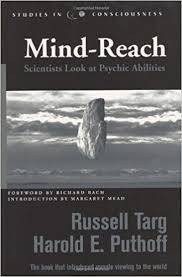 (The following review was published in the Journal of Scientific Exploration, Vol. 19, No. 4 (Winter 2005), and in Aperture, Vol. 3, No. 3.) When I sat down in 1999 to write my own book, I knew that the place I must turn if I went nowhere else was Mind Reach: Scientists Look at Psychic Ability, authored by Russell Targ and Harold E. Puthoff. It was the first book ever published specifically on the subject of remote viewing, and for some purposes it is still the best. I first encountered it in January 1984 in the Radio Physics lab at SRI-International in Menlo Park, California when Hal Puthoff handed over a copy he had inscribed and signed for me. I was there along with three other Army personnel to be taught the fundamentals of remote viewing to aid in American intelligence collection. As a military remote viewer, it was required reading for me, and I have continued to refer others to it ever since.

Back in 1984, the book was still available, though on a limited basis. The hardback was out of print, and a trade-paper edition was about to follow in its footsteps. A few months later I found a stack of a dozen or so of the latter in a Barnes and Noble in mid-town Manhattan, buying them at a dollar a piece to pass out to my fellow soldier-psychics at our Fort Meade, Maryland headquarters.

And then there was a long drought where the only copies of Mind Reach you could find were in a few libraries around the country and the occasional used bookstore, where the copies sometimes commanded excessive prices. The public emergence of remote viewing came in late 1995, the Internet spread the news widely, and still the seminal book of the field languished in obscurity, occasionally mentioned but otherwise unknown to all but ardent searchers.

Now, almost ten years from that watershed event, all that has happily changed. Mind Reach is suddenly once more widely available to anyone who wants it, thanks to Russell Targ and Hampton Roads Publishing Company. As the latest book to issue from their joint “Studies in Consciousness” project, the partnership has this time hit a home run with one of the most important-and influential-works in the recent history of parapsychology.

Graced with an introduction by legendary anthropologist Margaret Mead and a foreword by Richard Bach, of Jonathan Livingston Seagull and The Bridge Across Forever fame, the book documents among its pages the early years of the SRI remote viewing experiments with the likes of Ingo Swann, Pat Price, and Uri Geller. Present are descriptions of path-breaking experiments with which too many pursuing remote viewing today as a popular avocation are unfamiliar, yet which set the parameters for the discipline they are attempting to practice.

Details are here of the original experiment that first attracted the CIA’s attention, conducted by Puthoff and Swann on a quark-detecting magnetometer, along with several of the non-classified remote viewing experiments done by Swann and by Price. Here, additionally, are experiments done by Hella Hammid, Duane Elgin, and others. Even some remote viewing exercises engaged in by visiting CIA officials are included, though these covert remote viewers’ identities are disguised by the simple term “visitors.”

The book makes several important points that were relatively novel at the time it was first published, but which even today remain often ignored or unacknowledged. For instance, one chapter headed “Looking for Gifted Subjects,” is followed by the sub-head: “It turns out they’re all gifted!” When they used control subjects to provide a baseline against which to measure their supposed psychically-talented participants, The SRI scientists discovered that even the controls demonstrated surprising success in several of the experiments. Having conducted numerous experiments with 20 subjects by the time the manuscript was written, Targ and Puthoff noted that “So far, we cannot identify a single individual who has not succeeded in a remote viewing. . .” (p. 90).

Another important observation was that “. . .unanalyzed perceptions are almost always a better guide to the true target than. . . interpretations of the perceived data” (p. 102). In other words, what a viewer describes about the remote viewing target is more likely to be accurate than what she consciously believes or concludes the target to be. This discovery (for which Ingo Swann deserves much of the credit) laid the ground work for a breakthrough in understanding fairly epic in its proportions-the notion of “analytical overlay,” or “AOL.” It was found that left-brain-hemisphere processes create analytic mental constructs that “overlay” the perceptual material being received through the remote viewing process. This can lead a remote viewer to form wrong or heavily distorted interpretations of his or her remote viewing perceptions.

This insight proved crucial for understanding why erroneous data so often shows up in clairvoyant or remote viewing experiments, and helped in the development of remedial measures. In today’s grassroots remote viewing community this concept of AOL has become a virtual mantra. But many don’t really understand its conceptual origins, and so would profit greatly by reading this book.

Even though the work described in Mind Reach took place some thirty years and more ago, the insights provided often are still fresh and valuable.

There are two points to bear in mind about the book. First, though it is written by scientists and about science, it not specifically written for scientists, though there is much here that will profit them as well. Rather, it was written in a style intended to make it accessible to the layperson, and it succeeds in this reasonably well, while not sacrificing as much in the way of scientific precision as one might expect.

Also, the book reports only what was deemed to be releasable to the general public in 1977. Parts of the story of iceberg proportions lurked below the surface for nearly another 20 years, until the CIA’s 1995 declassification action began the unspooling of the rest of it. The June 2004 release to the public by the CIA of 90,000 pages of formerly-classified Star Gate Program archives brought a glut of new information about remote viewing. Mind Reach is still essential to understanding that material.

What makes this 2005 edition of the book all the more valuable is a new introduction specially written for it by Puthoff. Now it can be told who was really behind the consciousness research program at SRI, and why. It was, of course, the Central Intelligence Agency, hoping to find out through reverse engineering just what the Soviets were up to in spending huge sums of money on what our Cold War adversaries called “psychoenergetic” research. When the program first started, the CIA had no idea just how useful the SRI research would prove to be.

Also present in this edition of Mind Reach (though not noted in the table of contents) is an edited version of an article Puthoff, Targ, and Edwin C. May presented at an AAAS symposium on parapsychology in 1979, later printed in1980 in a small edition of the symposium’s proceedings. Previously all-but-unavailable, this article captures some of the most important of the SRI project’s findings from experiments conducted during the latter part of the 1970s, subsequent to Mind Reach‘s publication. Thanks to Puthoff I had recourse to this material in writing my own book, but despaired of anyone else having access to the valuable information it contains. It was a stroke of brilliance on the part of Targ to include it as part of this new edition.

Mind Reach is an essential addition to any library, public or private, on the subject of remote viewing in particular and parapsychology in general. If you don’t yet have the book, I recommend you buy a copy now. Even if you have an earlier edition, the extra material alone is worth the purchase price. One never knows when Mind Reach may fall out of print again-though we can hope it will not for a very long time.