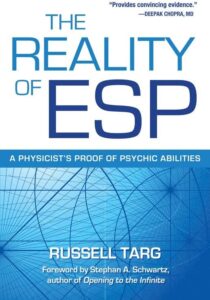 Recently, three book-length works have emerged, each attempting to make the same argument: The evidence for ESP is now so robust that it counts conclusively against the physicalist/materialist paradigm of modern science. The first two of these, Charles T. Tart’s The End of Materialism and my own Ph.D. dissertation, Is Physicalism “Really” True?: An empirical argument against the universal construal of physicalism, were both published in 2009. The most recent addition is Russell Targ’s delightful The Reality of ESP: A Physicist’s Proof of Psychic Abilities. All I will say here about the first two works is that I found Tart’s book to be a tour de force, and that I will have to leave my own efforts for others to judge.

My task now, though, is to examine Russell’s book. And I did not find it wanting. To be sure, he has other fish to fry beyond just establishing the reality of ESP, especially since he says this is “likely to be” his “last book” on the subject. (He has been even more emphatic in private conversation. “This will be” his last book on ESP, Russell has said to me; but we’ll see – I’m not yet ruling out the possibility that there might still be something more to follow.)

One valuable feature of this particular work is that it adds flesh to the bones of a number of the more enduring anecdotes from remote viewing history, contributing details and context previously unavailable. For example, he gives us more details of the Severodvinsk research facility that Pat Price famously described, where the remote viewer noted the presence of a gigantic traveling crane that only showed up on the most secret satellite imagery. As Russell recounts here, Price had a number of other hits on this target that at the time were discounted, but later confirmed by conventional intelligence means.

(Russell inadvertently overlooked one telling piece of correct information produced by Price, however. At the time of the viewing, US intelligence was convinced that the targeted Soviet installation had to do with development of so-called “death rays” – weaponization of particle-beam technology. However, with the fall of the Iron Curtain, it soon came out that the Severodvinsk facility was actually engaged in nuclear space propulsion research, and had nothing to do with particle beams. In his remote viewing, Price correctly declared that the site had to do with the Soviet space program, an assertion that was wrongly dismissed by an expert at Los Alamos who reviewed Price’s remote viewing results.)

Russell also treats us to additional details from Ingo Swann’s “mind probe” of Jupiter in 1973, in which Swann used remote viewing to try to discover information about the planetary giant in advance of future (and more conventional) space probes. Surprisingly, Swann reported rings around Jupiter, similar to Saturn’s. In 1973 this was consider absurd, but was confirmed six years later, when Voyager 1 observed the rings in its 1979 flyby of the planet.

One remote viewing legend that comes up for special attention is Hella Hammid, a professional photographer friend of Russell’s, who became a first-rate remote viewer almost by accident. Russell invited her to SRI to serve as a control – a supposedly “non-psychic” person – to provide a low-function baseline against which to gauge the degree of success of professed remote viewers who were being tested. Surprisingly, Hammid turned out to be as good or better than many of the more seasoned remote viewers, and went on to figure prominently in the results of some of the most successful SRI experiments.

The book also introduces other stories from the era that have previously only been known by hearsay, and gives us more insight into how Targ made his way into the heart of a hot-bed of parapsychology research. Among these is a relatively little-known story about how legendary remote viewer Pat Price was first to identify the ringleader of the group that kidnaped heiress Patty Hearst, and directed the police to the getaway car. Also interesting is Russell’s account of his efforts to develop an ESP teaching machine for NASA.

In establishing his primary thesis that, despite the dismissals and denials from distrustful physicalists, ESP is real, Russell gives a survey of the most widely known data – Braud’s DMILS work, the research done at the PEAR lab, Daryl Bem’s recent “feeling the future” work, and so on. The Reality of ESP also features chapters on distant healing, death survival, and a very useful one on how Russell teaches beginner-level remote viewing to groups and workshops he leads. This latter chapter alone is worth the price of the book, as there are many insights here from one of the most experienced promoters of remote viewing over the past 40 years.

He reserves considerable space, though, to discuss his own research. Of significant interest here is the account of his successes with associative remote viewing (ARV), a methodological approach to the phenomenon that raises the chances of successfully predicting the outcome of a future event far above chance. Russell explains, for example, how two of his ARV research projects were able to show significant success in predicting the silver futures market, and why one of them failed to do so.

As do many in parapsychology, Russell recognizes that mainstream science will always find it difficult to accept ESP without an explanatory framework that makes sense to science. To suggest a possible solution, Russell appeals to quantum non-locality (as referenced in the work of David Bohm) as a possible source for an explanation. Unfortunately, his explanation (as well as others who have tackled the problem) seems to have the flavor of a metaphor more than it does a nuts-and-bolts theory as to how psi links up with the rest of physics. In the end, I’m not sure he is any more successful than others who have proposed non-locality as an answer for how ESP works. Somewhat more successful, it seems to me, is his attempt to flesh out the “Eight-space” model he and physicist Elizabeth Rauscher worked out many years ago. This model relies more on a complex, multi-dimensional manifold that doesn’t require an appeal to non-locality to work.

Targ spends one entire chapter discussing how Buddhist teachings provide a congenial framework for ESP phenomena. I found this section informative, if not exactly riveting reading. Still, I did not find it especially persuasive. Russell and I have occasionally discussed this material, and so I am aware of his thesis that, roughly put, Indian philosophers understood the notion of quantum nonlocality in principle, if not in fact, long before the West had any inkling of it – at least as far as nonlocality may apply to human consciousness. In order to accept this thesis, however, one must accept two things rather than one: That Buddhist philosophy really does describe nonlocality; and that nonlocality really does explain ESP. The first requires a certain interpretation of writings that are now centuries old (yet other interpretations less congenial to Targ’s argument might be possible). The second requires acceptance of an hypothesis that is still very much undecided. Still, just to be fair, Russell is out to offer his explanation and conclusions, not to prove he is right beyond doubt, and I think he accomplishes his purposes rather nicely here.

One comment Targ makes strikes me as less plausible. He remarks that the “model of psi functioning” he is proposing “suggests that the information we access is always with us and therefore always available,” which “…seems to fit the data [Targ has] observed better than the information-transmission model (mental radio), in which one person sends a psychic message to another” (251-252). But why? How? More explanation is necessary here to tie his theory and the observed phenomena together. Though there are other theoretical, empirical, and philosophical reasons to reject the transmission model, the direct observation of how remote viewing and other ESP works prima facie fits the transmission model rather well. In the Upton Sinclair Mental Radio experiments and Rene Warcollier’s work, not to mention Ganzfeld and even in the SRI “outbounder” remote viewing research, in which a team of people served as a beacon at the target for the remote viewer, the transmission model would seem to have the best fit. Further, the fact that remote viewers don’t always seem to be able to access desired data effectively, plus reported geomagnetic and solar wind effects on remote viewing quality, coupled with the evidence for a local sidereal time effect as described by James Spottiwoode, all would seem supportive of the transmission model at the expense of Targ’s Buddhist/nonlocality theory. Don’t mistake me – I don’t accept the transmission model either. But Targ needs to account for the seeming discrepancies for his claim to be taken seriously.